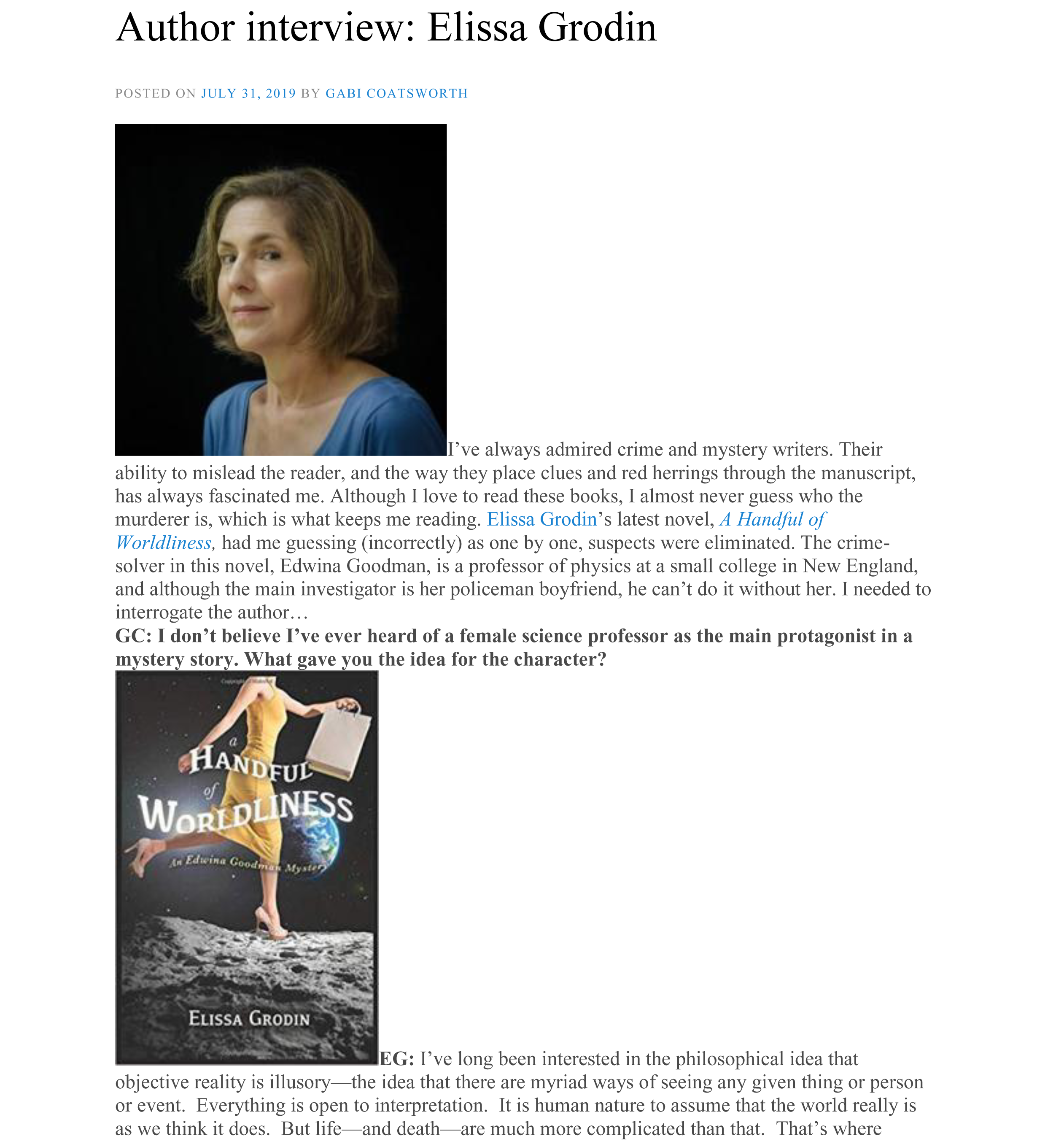 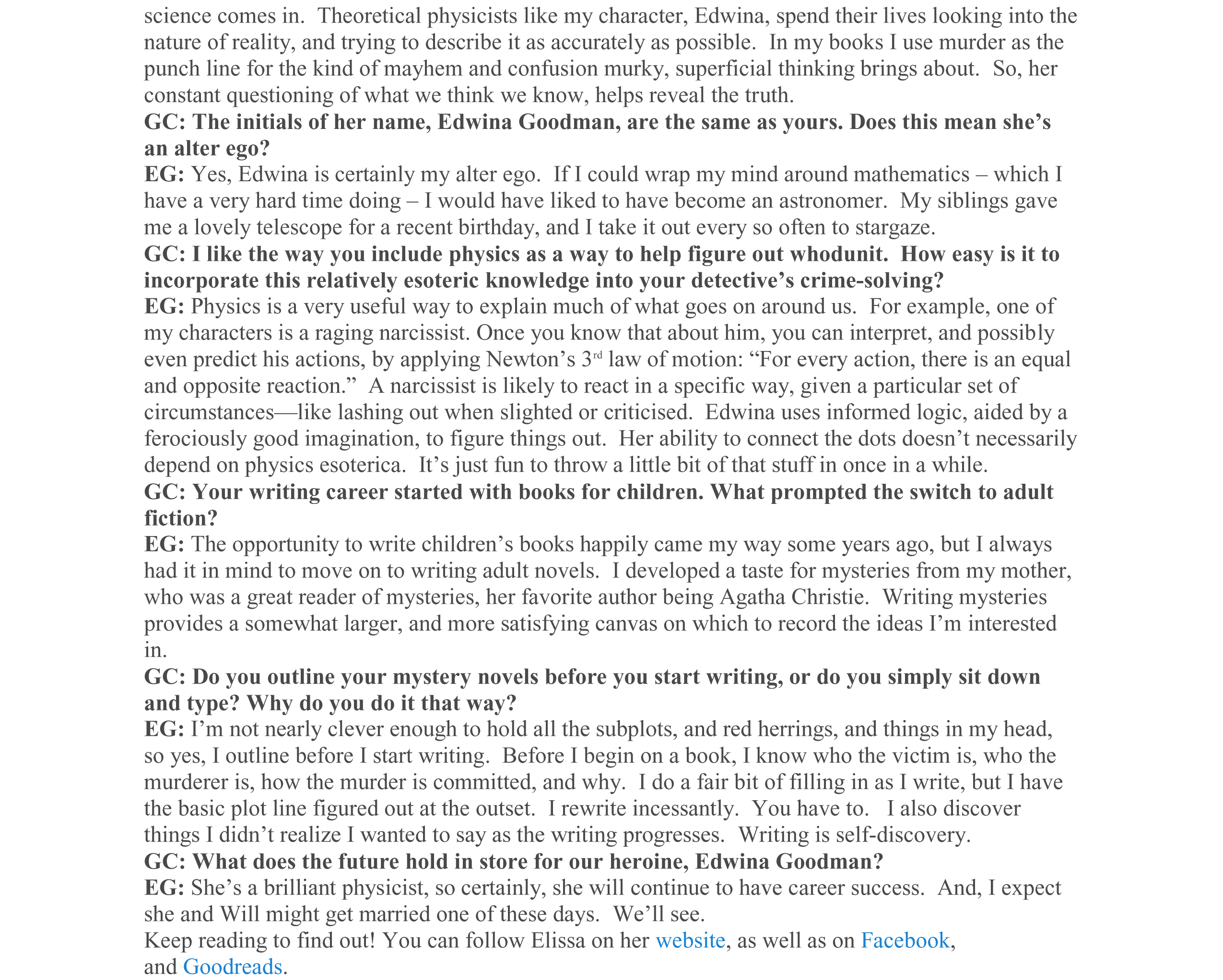 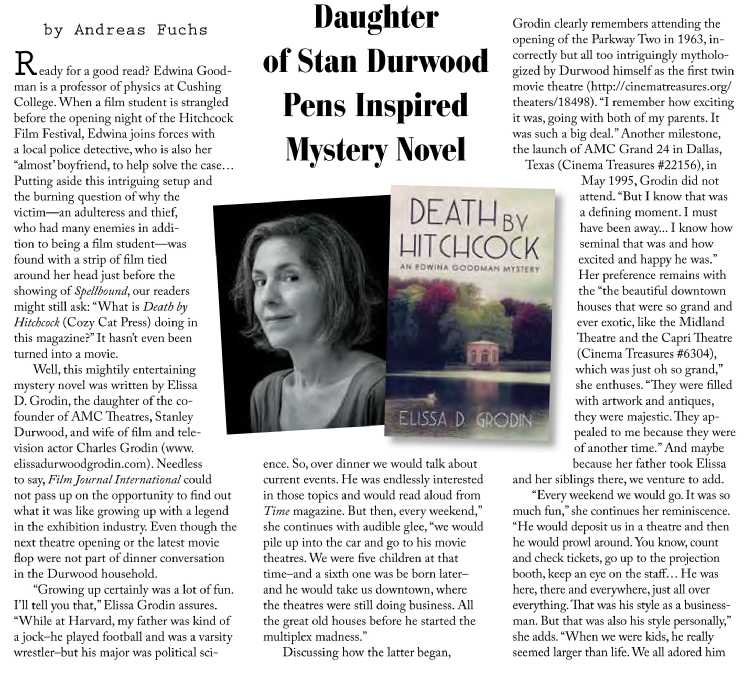 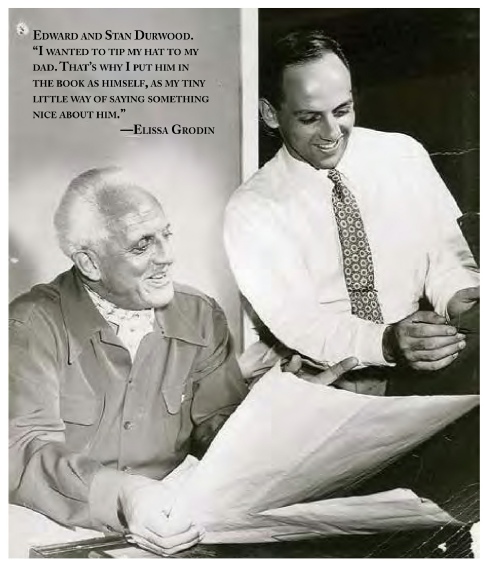 Welcome to the Wonderful World of Barbara Jean Coast

Hi there, guys and dolls! Well, it’s one of my favorite days — confab with a friend Sunday, otherwise known as Take 5 with Barbara Jean. Today I have the honor of sharing with you the wit and wisdom of one of my favorite writers, Elissa D. Grodin, author of the Edwina Goodman Mysteries, the latest and second being DEATH BY HITCHCOCK, another terrific novel. A siren named Bunny gets murdered at a Hitchcock Film Festival? I’m certainly in for the read! But just before you do, I suggest you sit yourself down with a martini or two and get to know a lady with the right balance of fun and finesse.

My protagonist is Professor Edwina Goodman, a theoretical physicist who teaches at a college based on Dartmouth. She is very much my alter ego, as I wanted to be an astronomer as a kid, but struggled terribly with the necessary math! At age 27, Edwina is brilliant, unaffected and guileless, and something of an absent-minded professor. In the second installment of the series, entitled DEATH BY HITCHCOCK, Edwina and her would-be boyfriend, Detective Will Tenney, finally get cozy as they investigate the “Spellbound” murder. In the sense that physics is the ultimate examination of cause and effect — action and reaction — Edwina makes a crackerjack sleuth. She sees connections where others don’t, and is able to connect the dots that explain why things are happening — including murders.

Whim doesn’t come into it for me. As Linda Ronstadt once said, ‘artists need to keep banker’s hours.’ In other words, routine is essential to get anything done.

I started writing as a kid, as a way to impose control over my environment, which struck me as somewhat chaotic and anxious-making. Writing is all about making order out of chaos for me — all about the illusion of control.

My first strong influence was Shel Silverstein, when I read UNCLE SHELBY’S ABZ’S. From Shel I learned you could be subversive — you didn’t have to toe the line of the status quo — you could forge your own version of what is ‘real’. At the age of seven or so, I was completely gobsmacked and scandalized by his entry for the letter ‘G’, in which he instructed his young readers to take the Green stuff out of daddy’s wallet and mail it to Uncle Shelby! I was thrilled to learn you could actually say something as naughty as that in a book! I later became friends will Shel, which was great fun. We often went shopping in Greenwich Village, near where he lived. Other important influences for me are Agatha Christie and Jane Austen, story tellers of the first order. Agatha Christie is also a personal role model for me. Besides being a brilliant writer, she was modest, full of grace, a mother, a wife, had a “violent attachment” to her home in the country, loved her gardens, and had a burning curiosity about the world around her. My kind of girl.

Just like you, Elissa! It’s been a true pleasure getting to know you better and share your thoughts with our readers. And friends, be sure to visit her website at http://elissagrodin.com to learn more about her other books and news.

Elissa Grodin’s father, Stan Durwood, was the founder of AMC Entertainment and invented the multiplex and megaplex movie theater concept. Elissa studied film at Dartmouth College, and painting at the New York School of Visual Arts. While living in London, she wrote for the London Times Literary Supplement, reviewing books and films. After moving to New York, she worked for Twentieth Century Fox, reading novels to be optioned for film rights.

As a freelance journalist, while on assignment for American Film Magazine, she interviewed Charles Grodin, the actor and writer. They were married a year later.

Death by Hitchcock is Elissa’s second Edwina Goodman novel taking place in the cozy college town of New Guilford. Soon after the start of showing the Hitchcock classic Spellbound, a scream is heard in the theatre. Moments later, a young woman’s body is found in the women’s restroom. Scrawled on the wall with lipstick is the message, “Revenge is sweet and not fattening,” a line from a Hitchcock film. There are many suspects with varying motives and opportunities, yet each one has an airtight alibi.

Elissa’s knowledge of classic films figures into the enigma of who committed the murder. Equally important is the novel’s protagonist, Assistant Professor of Physics, Edwina Goodman’s knowledge of physics in attempting to solve this intriguing mystery.

How do you go about constructing a mystery novel such as Death by Hitchcock?
I begin with my characters because I love a character-driven mystery. I place them in an interesting setting because I think that’s what sparks readers’ curiosity. I eventually find my way, but it seems to happen a little differently with each book. I think of the victim first. Who is it I want to kill off? That’s the fun part. I think we all have homicidal impulses and it’s great to have license to let my homicidal flag fly.

Actually, I work backwards, wondering who in that character’s world would have had a motive to commit murder. It’s really a matter of placing the victim in the context of relationships within the setting. It doesn’t always work, and sometimes I have to delete lots of pages. The fun is the challenge of creating this mystery, and the journey it takes to having it solved. As E. L. Doctorow said, ‘Writing is like driving at night. You can only see as far as the headlight beams, but you make the journey.’

Many writers worry about where the next idea will come from. Do you?
No, and I’ll tell you why. It’s because I’m not overly ambitious. (Laughter) If nothing comes to me, I just work in my garden which is a great thing for me to do. I’m kind of a fan of Zen Buddhism. Something in Buddhist thinking intrigues me: even the God of Spring doesn’t know where flowers come from. I sometimes ask myself, ‘Where did the idea for the last one come from?’ and the answer is, ‘It came from the same place the idea for the next one will come from.’ But how it happens is often a mystery to me.

What are the advantages of writing a series such as the Edwina Goodman mysteries?
There are two advantages. First, a series is more marketable. (Laughter). The second is more important: I really love my characters, and enjoy spending time with them. I want to see what’s going to happen to Edwina and Will, her romantic interest. I really delight in seeing my characters evolve. In a way, they’re going to let me know where they’re heading.

So, you go on a journey with your characters.
Absolutely, I do. And I hope my readers will, as well.

You once said writing a mystery involves bringing order out of chaos. Will you talk a bit about that?
I think all of writing does that. I’m a big fan of Freud. I’m intrigued by the notion that we each have a life drive and a death drive. It seems to me, the death drive entails pushing to get back from whence we came–the cosmic soup of stardust. So, that represents chaos–the death drive. My writing is pacifying, and gives me a delusional sense of control, making order out of chaos with words. With each book, I create my own little ordered universe.

You’re a huge film buff. How do films impact your writing?
I’m a very visual person. I visualize character and place, which helps me advance a novel’s narrative. For me, it’s like watching scenes in a movie. I have various movie scenes imprinted in my brain. I reflect on them as a sort of reference library. My books must maintain the same pacing and narrative drive, just the way a good film does.

What would you be doing if you weren’t a writer?
(Laughter) I would be puttering around. That’s what I like to do.
I’d read, work in my garden, listen to music, and go to museums to look at art.

What do you love about the writing life?
I love trying to experience life in the moment–to be fully alert during any moment in time. Writing does that for me. It keeps me focused in the moment. It’s like meditation. I love the absorption of writing, the immersion in the world I’m creating. It’s like working in the garden in the sense I experience a deep feeling of connectedness when I’m writing.

What has surprised you about the writing life?
How difficult it is. Ideas are easy compared to the actual craft of writing. It’s really hard for me to have a three-dimensional sense of anticipation. It’s such a challenge to put a complete world onto one canvas in an entertaining way.

What’s coming next from you?
I’m working on the third Edwina novel, tentatively entitled Quicksand of Reason. According to a criminal defense attorney I know, a majority of crimes are committed by people who lack a sense of boundaries and a sense of self. Having too much self-focus clouds our ability to see the world clearly. So, the novel is in part, a metaphor for unbridled vanity.

Mark Rubinstein
Author of The Lovers’ Tango and Return to Sandara