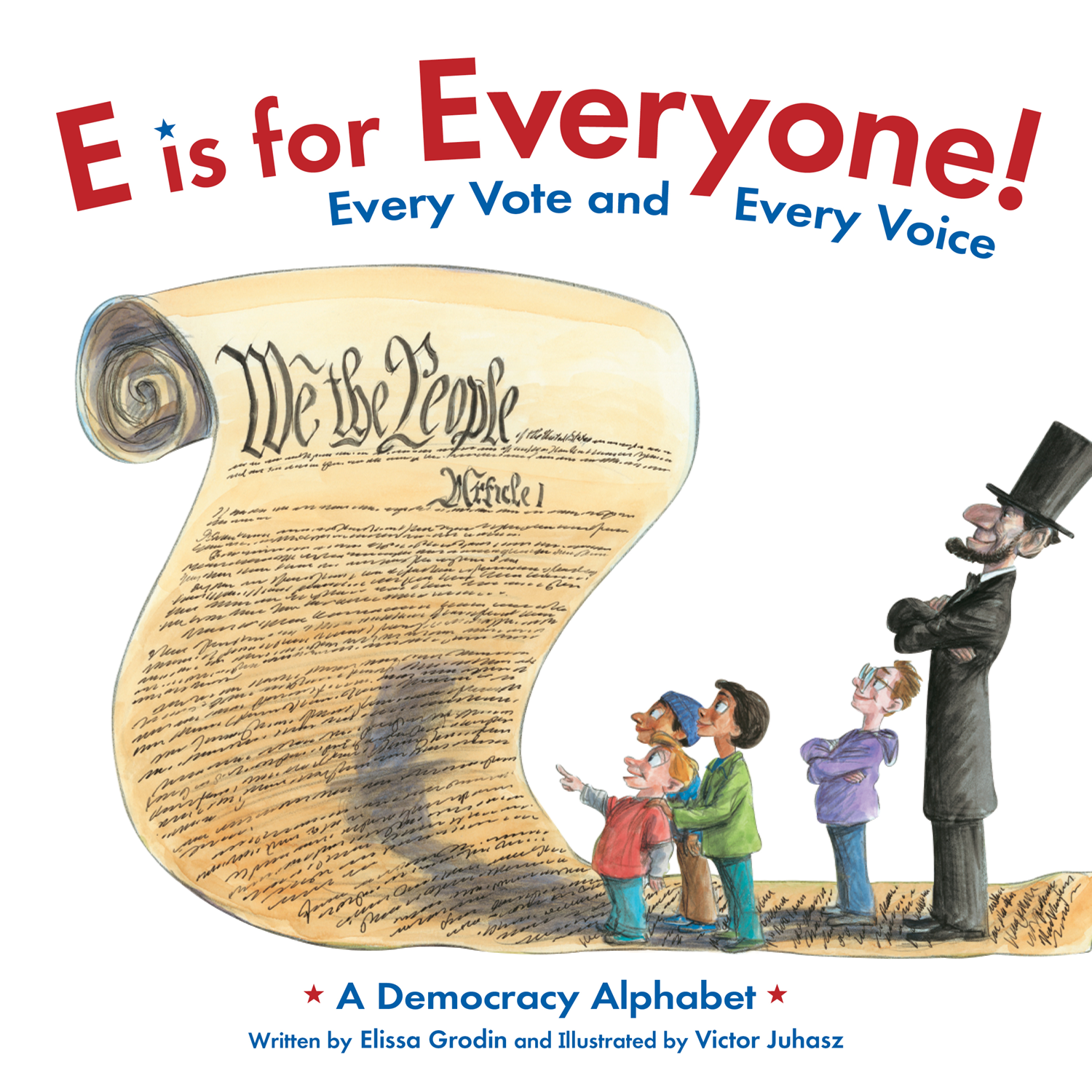 E is for Everyone!

Civics lessons are always timely and important, but they can often be very complicated. Despite the easy banter in today’s media, many adult Americans are still in the dark when it comes to knowing their rights and responsibilities as members of a democratic society. So how do we help our youngest citizens understand this important information in ways that make sense?

From amendments and elections, to Congress and the Constitution, E is for Everyone! Every Vote and Every Voice makes the workings of our government meaningful to young readers and their families. In a simplified A-Z format designed especially for young readers, poetry and colorful artwork explain the basics of America’s democratic system. 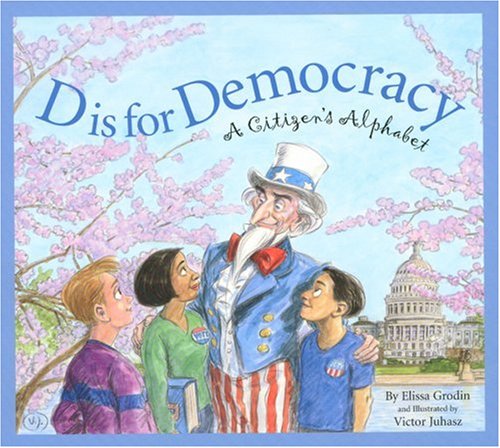 D is for Democracy

Despite the banter in today’s media, many Americans are still in the dark when it comes to knowing and acting upon their rights and responsibilities as citizens of a democratic society. In refreshingly candid and straight-to-the-point language author Elissa Grodin takes readers of all ages on an A-Z trip through our government’s structure, from its earliest beginnings to definitions of basic components and concepts (including immigration and taxation). Engaging, disarming, and frequently thought-provoking artwork from illustrator Victor Juhasz emphasizes the magnitude of the subject. From founding fathers, first ladies, and the First Amendment to the presidential oath of office, D is for Democracy details the political processes, parties, and people of democracy, American-style. Elissa D. Grodin grew up in a large family in Kansas City, Missouri, and was fifteen years old when she started to write short stories. While living in London in the late ’70s, she wrote for the Times Literary Supplement and New Statesman. After moving to New York, she studied at the School of Visual Arts and met her husband, actor Charles Grodin, while interviewing him for American Film magazine. D is for Democracy is her second children’s book with Sleeping Bear Press. She also wrote N is for Nutmeg: A Connecticut Alphabet. Elissa lives with her family in Wilton, Connecticut. A graduate of the Parsons School of Design, Victor Juhasz began illustrating in 1974. His humorous illustrations and caricatures have been commissioned by major magazines, newspapers, advertising agencies, and book publishers both national and international, and his clients include Time, Newsweek, The New Yorker, Rolling Stone, The New York Times, The Washington Post, and GQ. Victor lives in Elizabeth, New Jersey.

“[This} beautiful book will inspire and enlighten citizens of all ages about our precious democracy.” 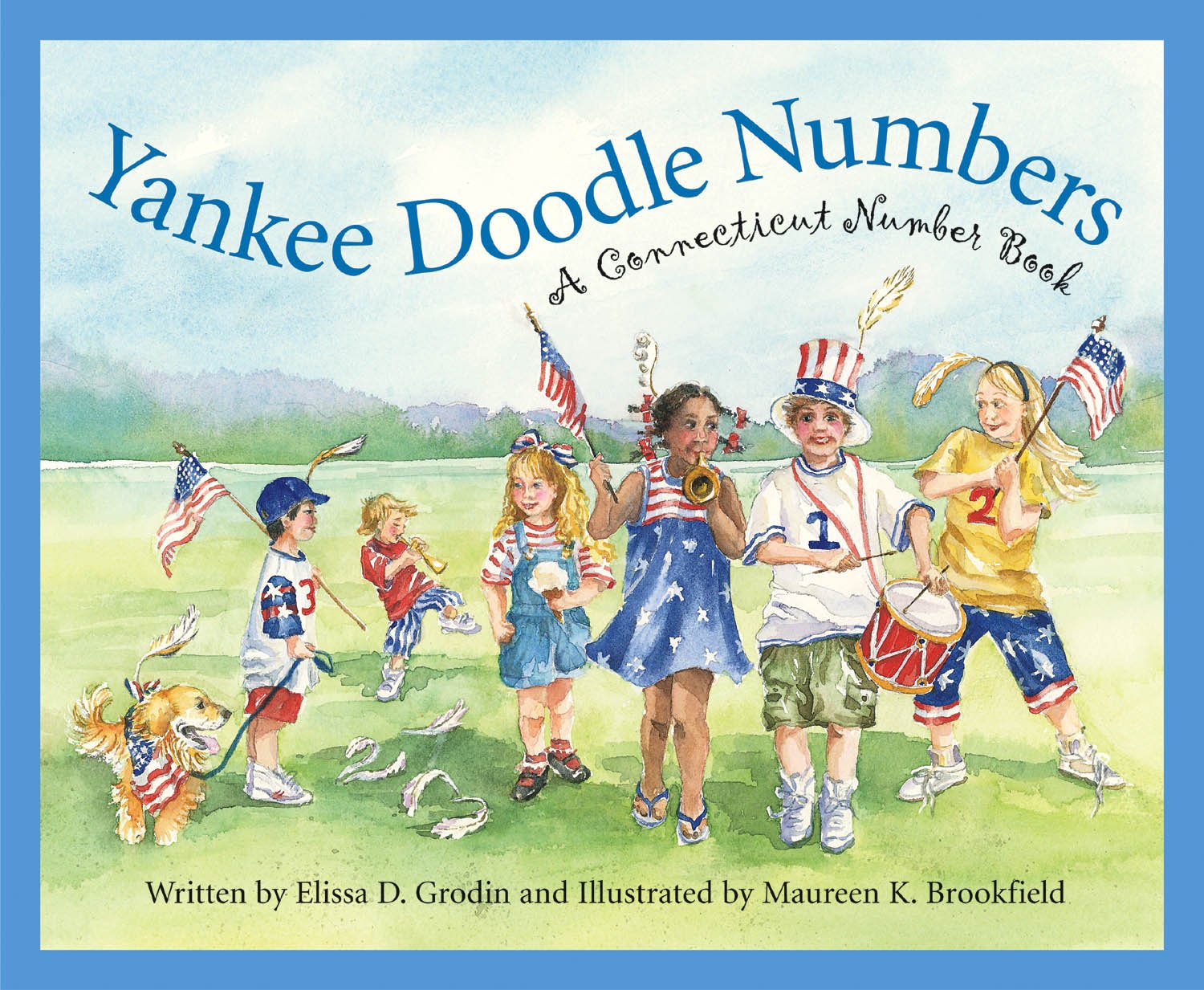 From Elissa Grodin and Maureen Brookfield, the author-illustrator team behind “N is for Nutmeg: A Connecticut Alphabet”, comes another rousing state tribute. Using numbers as its backdrop, “Yankee Doodle Numbers: A Connecticut Number Book” gives an entertaining and educational travelogue of the state’s historic moments, symbols, landmarks, and famous people. An ice age carved the landscape where settlements could thrive. This lush and wooded colony became state number 5. From its role during the Revolutionary War to its nickname of the “Land of Steady Habits,” the history and wonder of Connecticut comes alive.Elissa Grodin’s recent work for Sleeping Bear Press includes the popular Everyone Counts: A Citizen’s Number Book and The Happy Prince. She attended Dartmouth College and the School of Visual Arts. Elissa has written for the Times Literary Supplement and New Statesman. She lives in Wilton, Connecticut. Maureen Brookfield is an accomplished artist best known for her watercolor paintings. She attended the Parsons School of Design and the Art Center of Northern New Jersey, and has studied with several prominent and nationally known artists. Maureen lives in Marshfield, Massachusetts. 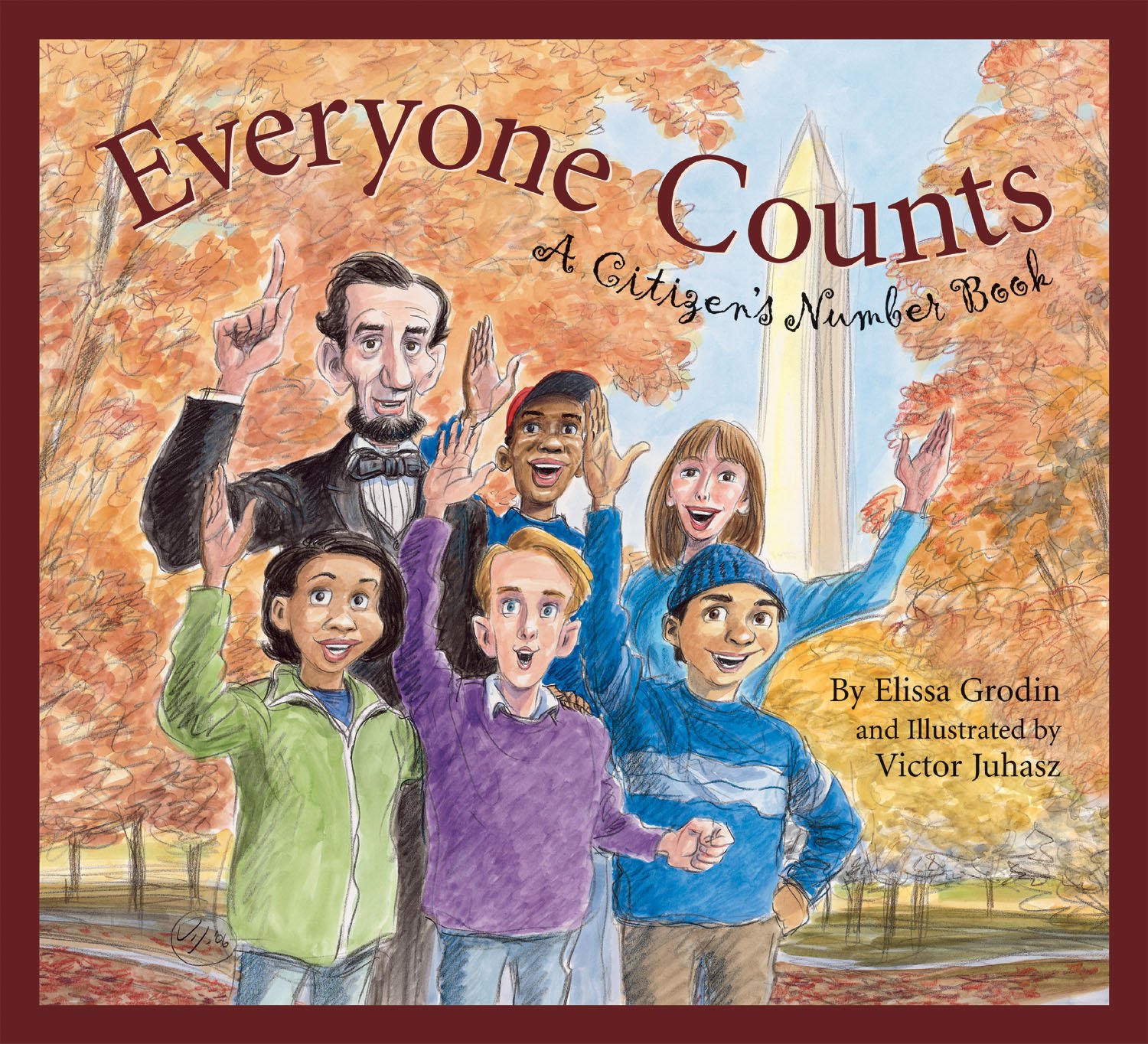 Fresh from their successful book D is for Democracy: A Citizen’s Alphabet, Elissa Grodin and Victor Juhasz team up again to spread the word that understanding civics is not only fundamental, but also just plain fun! Using numbers as its backdrop, Everyone Counts: A Citizen’s Number Book gives an entertaining, educational tour through America’s system of government. Quick! How many justices sit on the Supreme Court? Or, how many branches of government make up our particular democracy? Starting with the Constitution (Number 1, of course!), to amendments passed thus far (27), to the number of senators in the Senate (100), Everyone Counts explains the processes, people and history of our government. 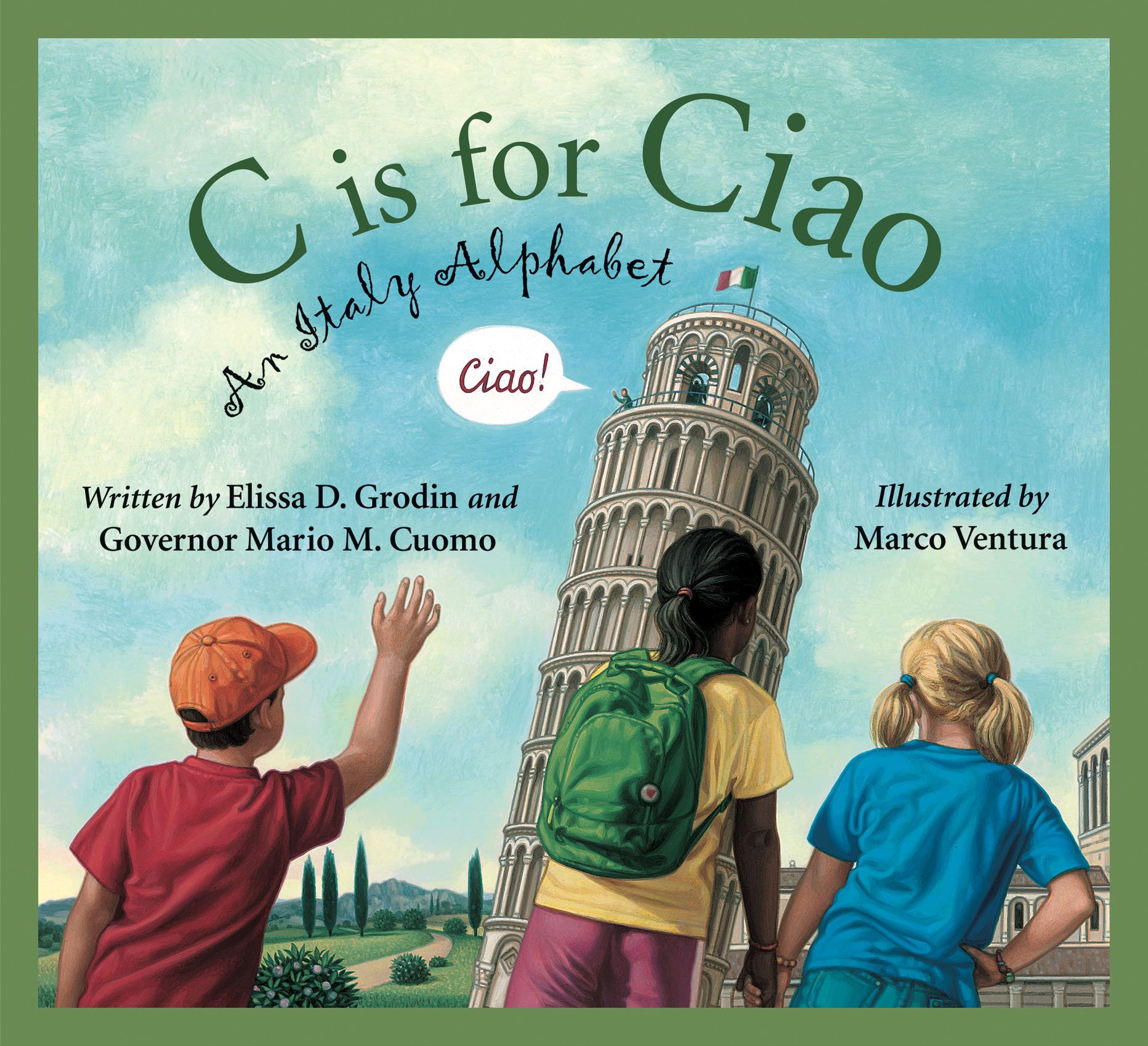 C is for Ciao

From its unparalleled achievements in art and architecture (the Sistine Chapel), science and exploration (Galileo Galilei), music and literature (Stradivarius and Dante), the country of Italy has had a lasting and profound impact on the world. In C is for Ciao: An Italy Alphabet, young readers are invited to explore Italy’s rich history, diverse geography, and many traditions. Sumptuous artwork magnifies each letter topic’s poem expository text. R is for the city, Rome, whose beauty will astound you. Modern life is bustling while antiquities surround you. Renowned Italians such as Augustus Caesar (first Roman emperor), Amerigo Vespucci (Florentine explorer), and Leonardo da Vinci (Renaissance artist and scientist) come to life alongside stunning monuments, breathtaking scenery, and history-in-the-making moments that have shaped and the world at large. Governor Mario Cuomo adds a personal message reflecting on his Italian heritage.To find recipes, games, interactives maps and much more for this title visit www.discovertheworldbooks.com! Elissa D. Grodin’s Sleeping Bear Press books include D is for Democracy: A Citizen’s Alphabet and the recent retelling of Oscar Wilde’s classic story The Happy Prince. She lives in Wilton, Connecticut. The son of Italian immigrants, Mario Cuomo has spent many years in the public service sector, serving as New York’s Secretary of State, Lieutenant Governor, and Governor. Today he practices law in New York. Marco Ventura’s work has been featured in many publications and his clients include Chronicle Books, The Atlantic Monthly, and the New York Times Book Review. His 2003 picture book, The Amazing Air Balloon, was a Junior Library Guild selection. He has twice won the Society of Illustrators Silver Medal award. He lives in Milan, Italy.

“This brilliant and imaginative children’s book captures the extensive impact that Italian history has on our society while making it accessible to a child’s mind.” 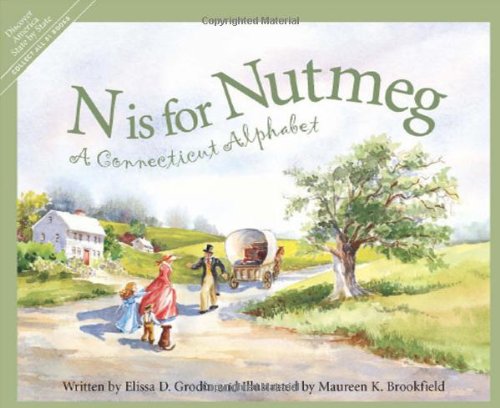 N is for Nutmeg

As one of the 13 original colonies, the state of Connecticut has played a pivotal role in our nation’s history — from its Revolutionary War figures such as Nathan Hale to its captains of industry and invention. N is for Nutmeg entertains as it informs readers on the history and geography, facts and folklore of Connecticut — learn why Groton is the submarine capital of the world and how Samuel Clemens got his pen name.