Assistant Professor of Physics, Edwina Goodman, is the protagonist in this New England murder mystery. Her remarkable imagination and ability to think outside the box of conventional logic make her not only a brilliant theoretical physicist, but also an excellent sleuth. She is able to see connections between seemingly unrelated events, and is compelled by an unrelenting curiosity to do so everywhere she looks. Her boyfriend is an up-and-coming police detective on the New Guilford force. When a presenter at the nearby home shopping network, GHN (Gotta Have it Now!), drops dead minutes after walking off the set, Will’s gut tells him it isn’t from natural causes, even though her death at first presents as such. The dead woman is GHN host, Fanny Spendlove — vain, ambitious, and widely disliked. When the bizarre cause of her death is discovered, her demise is ruled a homicide. A number of suspects crop up at GHN — among them, the vengeful make up woman who bitterly resented Fanny; a fellow presenter whose reign as Queen Bee has been steadily eroded by Fanny; an executive vice president who has an ambiguous past with Fanny. Soon enough suspicion is cast beyond the four walls of the network, when Will discovers Fanny had a romantic association with a famous Hollywood actor, whose pit bull of an agent strongly disapproved. Then there’s the neurotically obsessed GHN fan, who is forever — and in vain — trying to form a relationship with Fanny. The case begins to unsettle Edwina when the investigation takes an unexpected turn toward Edwina’s own Physics & Astronomy Department. 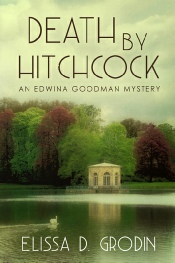 The brazen and mocking murder of a beautiful, entitled, and widely disliked student in the Film Department at Cushing College fires small town detective Will Tenney into action. He is assisted by his would-be girlfriend, physics professor Edwina Goodman, who uses her training as a theoretical physicist to think outside the box, and ultimately solve the murders by seeing connections where others don’t. With nods to classic film and mathematics, this mystery pays earnest homage to Mrs. Christie.

Physics Can Be Fatal

Twenty-five year old postdoc Edwina Goodman is a physics instructor at Cushing College, an Ivy League school in the beautiful New England town of New Guilford. She is unassuming, brilliant, guileless, and engaging — and most of all, endlessly curious about the world around her. Edwina does some of her best thinking while river kayaking and riding her bike. She lives alone in a cozy little house in the woods heated by a wood-burning stove, on Canaan Farm Road in New Guilford.
Distinguished Professor of Physics Alan Sidebottom travels from Cambridge University to teach at Cushing College for a semester. Within a few days of his arrival at the college he is found dead in his digs. The manner of his death is not immediately clear, but the cause is an apparent heart attack. Handsome young detective William Tenney of the New Guilford Police investigates the professor’s death. He gradually discovers there is no shortage of motives, ill-will, or secrets among the members the physics department toward the extravagant and eccentric Professor Sidebottom, who had a well-earned reputation as a philanderer and all-around ‘bad boy of physics’.
Edwina is dogged by guilty feelings over Professor Sidebottom’s death. He died shortly after having dinner with her, and she keeps wondering if she might have prevented his death by spending more time with him that night. But the professor had become drunk and tiresome at dinner, and Edwina cut the evening short and bicycled home. In the wake of his demise, she is compelled to ferret out every possible snippet of information about his death, and to follow up every lead — she turns out to be so deft at connecting all the dots, Detective William Tenney takes her on as a sidekick in the investigation. The two find that they are like-minded and compatible, but as self-sufficient, unregenerate loners, they find it difficult navigating their mutual attraction.

The page you requested could not be found. Try refining your search, or use the navigation above to locate the post.